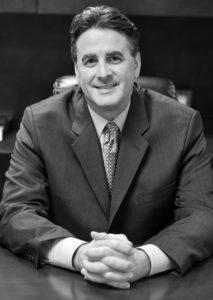 Antonio DeBlasio is the founder and managing member of DeBlasio & Gower LLC. Mr. DeBlasio is an experienced litigator who puts his clients first. He has advised individuals, business executives, for profit and not-for-profit companies and government bodies on the prosecution and defense of complex civil and business litigation matters.

Antonio DeBlasio has been selected as an Illinois Super Lawyer in Business Litigation on eight separate occasions in 2018 and 2014-2020. Only 5% of Illinois attorneys receive this distinction from Illinois Super Lawyers®. Clients he has served on the plaintiff’s side of cases have recovered over $90 million. Clients he has served on the defense side have avoided millions in potential liability.

Mr. DeBlasio has successfully prosecuted and defended matters in many adversarial settings, including state and federal courts in Illinois, Arizona, Indiana, New York, Ohio, Iowa, Missouri and Pennsylvania, arbitration and mediation matters before JAMS, the American Arbitration Association and the American Health Lawyers Association, as well as the Illinois Health Facilities Planning Board and the Illinois Court of Claims.

Tony has represented clients from a multitude of industry sectors, including, health care, technology, communications, financial, education, real estate, manufacturing, construction, management firms, consulting firms, not for profits, religious organizations, as well as foreign and domestic government entities. The breadth of his experience is evidenced by the representation of foreign clients’ interests in the United States, as well as the fact that he has served as a Special Assistant Attorney General on behalf of an Illinois Governor, as special outside counsel to the Illinois State Board of Education, and as counsel to a receiver appointed by a federal court in an SEC action involving a massive Ponzi scheme.

Prior to starting the firm, Tony was a partner in the Commercial Litigation Group of one of Chicago’s largest law firms (Gardner, Carton & Douglas n/k/a Drinker Biddle & Reath). Tony then served as a litigation partner at a small, boutique law firm in DuPage County, Illinois that focused on representing government entities.

Tony has four children, two by marriage to his lovely wife Jenni (all of whom cross-examine him regularly). Tony is an avid fan of the Chicago White Sox, the Chicago Bears and the Purdue Boilermakers. Tony enjoys spending time with his wife, children and family.  He also enjoys traveling, biking and anything outdoors, as well making homemade wine and sauce (not gravy), savoring a good meal, and trying to hit his driver in the fairway.